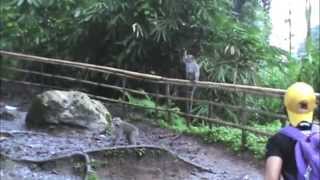 If you think "pepper" is what you use to season food, you're wrong AND in the right place. Volleyball terminology can mean something completely different off and on the court! Here is your go-to volleyball dictionary.

Approach – the footwork used to get the body in position to overhead attack a ball; usually consisting of 3 or 4 steps

Bow and arrow – an ideal hitting position, prior to spiking or attacking the ball. The elbow of the hitting arm is high above the ear and the non-hitting arm is pointed up towards the ball, simulating an archery technique.

Cover – a tactic to prevent a hitting teammate from getting blocked to the ground by the other team. All non-hitting members of the team use any form of defense to avert the ball from hitting the ground after the block.

Dig – a defensive method using the forearms when defending a hitter’s attack; see bump (No dirt and shovel involved!)

Float Serve – a serve that is hit with a solid and rigid hand; a serve that creates lateral ball movement on the ball as it floats over the net; a jumping version of a float serve is called a jump float serve

Hitter – A player who overhead attacks the ball

Jump Topspin Serve – a jumping serve that uses an approach similar to attacking or spiking a ball; a serve that is hit similarly to an attack or spike

Libero – a player that can be put in the game without using a substitution because of this, he or she wears a different colored jersey; usually one of the best diggers and/or passers on the team

Lift – a mishandling error when a player holds the ball for too long during the play, likely to occur when setting

Pepper – a drill consisting of bumping, setting and hitting consistently and consecutively with a partner

Pokie – A tactic typically used in beach volleyball poke, an attack using the knuckles, also known as cobra or dink

Pancake – A digging method that uses a flat hand on the ground to prevent the ball from hitting the ground (see below!)

Shank – An error digging a ball; the ball is dug in the opposite direction of any teammate and typically ends the play

Shot – A type of hit that favors placement over power; usually placed in an area of the court where the opponent is not

Set – a tactic used to send the ball to a hitter, uses finger tips and wrist movement

Setter – a player who delivers the ball to the hitters; see set

Sprawl – a body dive used to reach a ball out of close proximity; requires player to slide of his or her body on the floor

Tool – a tactic of hitting the ball against the opponent’s block in order to deflect the ball out of bounds and win the point, used when attacking the ball

Any words we missed? Please share any crazy volleyball words you, your friends or your coaches use!